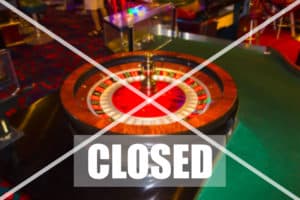 Amidst the worsening situation caused by the coronavirus pandemic, the Great Canadian Gaming Corporation has been forced to close more casino venues across Ontario.

Due to a reduced scope to run its venues at standard capacity, the Great Canadian Gaming Corporation (GCGC) has taken the step to close two of its casinos in Ontario.  The venues that have been shut down are the Elements Casino Flamboro and the Elements Casino Mohawk.  The temporary closure is in line with the health recommendations issued by the government of Ontario.

The current pandemic has taken a heavy toll on the Canadian gambling industry, and casino operators have been advised to remain as flexible as possible in light of the dynamically changing situation.

Ontario’s provincial administration recently announced that some businesses would have to reintroduce certain restrictions over the next couple of weeks, to curb the infection rate in the province.  Casinos have been identified as venues that will fall under the new restrictive regime of operations.

Up to this point, Ontario casinos were allowed to welcome a maximum of 50 patrons at a time, to promote social distancing.  This limitation has already been considered as very tough by the casino operators, who undertook to run their venues at a loss during the initial period of reopening.

With further restrictions on the cards, the Great Canadian Gaming Corporation announced the temporary shutdown of two of its gambling hotspots.  Both elements Casino Mohawk in Milton and Elements Casino Flamboro in Hamilton were shut down indefinitely on 15 November.

As it stands, no timeline is in place regarding the possible reopening of these two venues.  This comes as a disappointment to hundreds of local gamblers, with the two venues only recently reopening their doors, on 28 September.

Additionally, GCGC pulled back from its decision to reopen Casino Woodbine and the adjacent Woodbine Racetrack.  The casino and horseracing venue was initially scheduled to reopen its doors on 14 November, although this decision has now been shelved.  GCGC’s venues in Nova Scotia and New Brunswick will remain open, for the time being.

The current round of closures comes amidst an acquisition deal regarding the casino provider.  According to the latest reports, Apollo Global Management Inc. has invested CA$3,3 billion in GCGC common stock.  However, their CA$39 per share offer was turned down by the minority shareholders of the corporation.