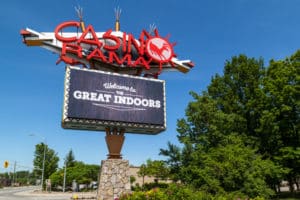 An official announcement has been released, indicating that Casino Rama could be back in operation soon, continuing its support for charities.

The popular gaming venue and the largest tribal casino in Ontario, Casino Rama, could return to full operation fairly soon.  The venue has been preparing for the reopening of its facilities, with special restrictions and measures put in place to guarantee staff and customer safety.

The announcement of a possible reopening was made by chief Ted Williams of the Rama First Nation.  The casino, which is administered by Gateway Casinos and Entertainment, has been closed since March, and the plan is to have the venue up and running by the end of November.

Even though the rest of the Gateway Casino venues reopened at the end of September, Casino Rama remained closed past that date.  The venue has recently entered into discussions with the Ontario Lottery and Gaming Corporation, as well as its parent company, Gateway Casinos and Entertainment, regarding the appropriate safety measures that need to be introduced at the venue.

According to the reopening blueprint, the venue will not allow anyone to come and gamble as they please.  Individuals will be receiving invitations to come to the venue, and this policy will be implemented during the first few weeks of its operations.  Furthermore, there won’t be any table games available, since these don’t allow for proper social distancing protocols to be observed, as well as any food or drinks served on the floor.

Charitable Organisations at a Loss

Casino Rama has remained closed primarily due to the restriction of a maximum of 50 people at a time inside any gambling venue, that was implemented by the Ontario government.  As a result of the shutdown, many local charity organisations have expressed their desire to see the casino open again.

Organisations such as The Sharing Place Food Centre largely depend on gaming revenue to keep their operations afloat.  According to Chris Peacock, the Executive Director of the charity, Casino Rama has always been the biggest supporter of The Sharing Place, with donations coming in the form of both food and cash.  In the interim, the organisation has had to reach out to other corporations to keep the funding of its operations going.

Ontario Lags Behind Other Provinces with Online Bettors 

Who Are the Wealthiest Casino Owners Globally?

5 Extreme Sports to Try Out in Las Vegas