Canada to get the Biggest e-Sports Stadium in the World 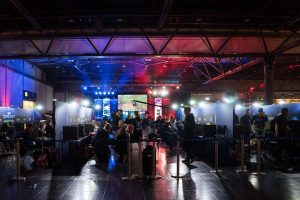 The first thing that springs to mind when thinking of e-sports is remote wagering on sporting events without physically being present at a game or a match.  So, it might come as a surprise that Canada is building the biggest e-sports stadium in the world.  Yes, you heard right.  A physically built stadium is in the pipeline, where i-gaming and e-sports tournaments are to be held and where you can bet on your preferred player or team.  While this might sound like sci-fi, e-sports stadiums have been around for a number of years, and they are becoming increasingly popular with Canadian gamblers, who are looking for more unique ways to wager their money.

The first e-sports arena opened in Richmond, British Columbia in 2019 and has proven to be a massive success with the local e-sports enthusiasts.  The 250+ spectator digital arena soon became the premier space for e-sports and i-gaming and has hosted tournaments, events, viewing parties and boot camps.  With such overwhelming interest shown by the Pacific Northwest i-gamers, it comes as no surprise that an even larger stadium is planned to open its doors in Toronto soon.

With the legalisation of e-sports betting in 2018, Canadian punters have made full use of this new form of wagering.  Some of the biggest names in Canada’s internet gambling industry moved to offer e-sports betting, to accommodate the market demand.  By interlinking betting with existing e-sports or i-games, a whole new market niche was created, and interest in e-sports surged.

The interest in e-sports comes from drive and motivation, as well as the competitive spirit of the audience.  When an individual can bet on their favourite e-sports team, the interest of the wider audience is immediately piqued, as the sports event is no longer just an entertainment happening.

With Canada being one of the first countries to permit local gaming operators to offer e-sports betting, there is a belief that e-sports could even garner the same level of popularity as online casino slots.

In June 2019, Myesports Ventures, a Metro Vancouver company, opened the first purpose-built e-sports arena in Canada, offering a permanent home for this popular pastime.  The stadium features space for 250 spectators and provides those who prefer to play rather than watch, an opportunity to participate.  The gaming area offers over 40 setups, as well as a section where the players can socialise with other competitors.

While the interest shown from the local e-sports enthusiasts has been significant, there have also been tourist groups visiting the stadium, both to watch and partake in the tournaments being offered.  The stadium also hosted a highly successful Counterstrike and FIFA 2019 e-gaming tournament, where the audience actively participated in both the wagering and spurring on of their favourite teams.  The Counterstrike tournament lasted for 12 weeks, and the stadium was filled to capacity during most of the competition.  Further matches that took place include a Fortnite and League of Legends competitions, which also turned out to be highly successful.

Biggest e-Sports Stadium in the World

Noting the success of the Vancouver stadium and believing that e-sports holds the key to futuristic sports and e-sports betting, the provincial government of Ontario has taken the first step to build the biggest e-sports stadium in the world.  With Canada having one of the most progressive legal frameworks governing i-gaming entitles, it seems a logical next step to begin the construction of this sporting venue in Toronto.

Toronto is also home to some of the more prominent names in the i-gaming industry and includes the likes of Ubisoft and BioWare, amongst others.  The city is also renowned for its bourgeoning online gambling and e-sports spread, offering something to both locals and tourists alike.

The Future of e-Sports Betting

The rise of e-sports stadiums has allowed players to wager on both live sports events and i-gaming tournaments.  This has led to the diversification of ways a player can bet their money and ways to win.  Ultimately, greater choice means more players and higher winnings for those who know which team to back.