Beginners Guide to Playing the Game of Faro 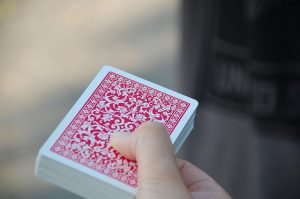 Faro, or pharaoh, is an increasingly popular casino card game that became trendy during the wild west days, with its origins spanning back to 17th century France.

While it doesn’t usually come on top of players’ wishlists when it comes to card games, faro has seen a resurgence over the past couple of years.  Though it’s often compared with poker due to the speed of the gameplay and the odds, faro has remained a unique gambling experience for all who fancy this game.

The History of Faro

Faro, or pharaon, is an offshoot of the game of basset, which took France by storm during the latter part of the 17th century.  The game saw its zenith during the early reign of Louis XIV.  Nevertheless, the king had the game outlawed in 1691 as an attempt to combat the growing gambling problems that were gripping the French society of the time.

However, the prohibition didn’t snuff out the game, and it migrated across the channel to England and, from there, to the United States.  By 1882, faro became the most popular gambling game across the wild west, surpassing all other games put together.

The game lost its shimmer following the second world war, although it has been making a reappearance over the past couple of years.

As with any game, there are specific jargons associated with the game of faro:

Setting Up a Faro Table

A typical faro table is oval, covered by a green baize.  The banker assumes his place in a cut-out section of the table, from where he deals. A board with a single suit of spades attached to it in numerical order is placed on the table, representing the betting layout.

A punter can bet using three separate methods.  The first one involves betting on one of the 13 cards.  Alternatively, a bet can be placed on several cards per round, by laying the bet between multiple cards.  Finally, a bet can be made by betting on the high card bar, which lies on top of the layout board.

Any card on the layout board that matches the banker’s card will lose, and the banker will win all bets on those cards.  The cards with the same denomination as the punter’s card are returned to the player, with a one-to-one payout from the banker.  Ultimately, punters that bet on the high card will win if their card value is higher than the banker’s card.

Punters get paid at the end of each round.  Bets placed on cards that did not win or lose remain in their positions, unless a punter elects to collect them or replace them with alternative cards.  If a banker draws a doublet, he wins half the bet that was placed on the card of that denomination on the layout board.

A copper token, or coppering the bet, can be used to reverse the intent of a bet by inversing the win/loss piles.  Once there are only three cards left in a shoe (the banker’s card, the player’s card and the hock), the banker would ask the punters to predict the order that these would be drawn.  This is known as calling the turn.

If a punter wins a call, they are paid four-to-one, unless there is a pair amongst the three cards, which results in a one-to-one payment.  If all three cards are the same, the bets are voided.

Although regarded as old-fashioned, faro is making a comeback in contemporary gambling establishments.  The game offers the speed of poker and the edge of blackjack and can be played by as few as two players at a time.  So, if you enjoy card games and yearn for something new, faro might well be the right game for you.